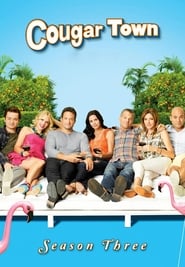 The third season of Cougar Town, an American sitcom that airs on ABC, began airing on February 14, 2012 and concluded on May 29, 2012 with a 1-hour episode. Season three regular cast members include Courteney Cox, Christa Miller, Busy Philipps, Brian Van Holt, Dan Byrd, Ian Gomez, and Josh Hopkins. The sitcom was created by Bill Lawrence and Kevin Biegel. This is the final season to air on ABC before it moves to TBS.